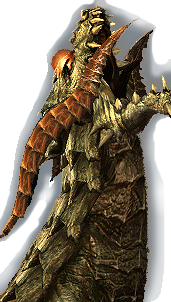 Antharas, The Land Dragon, was the first Epic Raid Boss introduced in the first chronicle of Lineage 2, and are the father of the famous game gimmick and standards for gargantuan monsters being killed by an enormous number of players.

One of the six dragons born of the union between Gran Kain, god of destruction and Shilen, goddess of darkness, Antharas' attribute is earth.

In the distant past, Shilen gave birth to six dragons, which she sent to the forefront in her war against the other gods. After Shilen was defeated and retreated to the world of the dead, the gigantic beast Antharas nested deep within Dragon Valley in Giran, waiting for the day of Shilen's resurrection.

The humongous size of Antharas far surpasses that of all other evil beasts. Even a very powerful sword would not easily inflict damage upon the body of the dragon, so densely is it covered with rock-hard scales. Beams of light emitted from the monster's eyes cause those who gaze upon it to freeze in horror. Antharas is fittingly regarded by all adventurers as the ultimate symbol of pure terror.

Rather than anxiously waiting to defend against Antharas' dreaded return, the protectors of the land of Aden are hastily recruiting the bravest citizens for an anticipatory strike against this nearly invulnerable beast.

The player can do the quest Audience with the Land Dragon with the NPC Gabrielle in Giran, to gain the item Portal Stone that can be used in the crystal in the very deep of Antharas Lair to gain access to Antharas Nest, where the monster resides.

Most advanced players suggest at least 3-4 party's to face the Land Dragon.

Antharas on Lineage 1
Community content is available under CC-BY-SA unless otherwise noted.
Advertisement