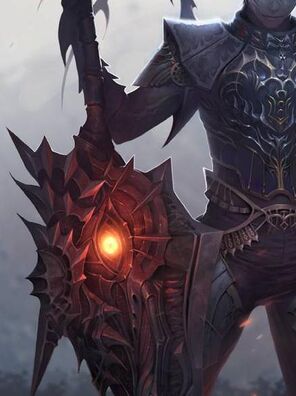 The Cursed Swords are a feature implemented in Dath of Blood chronicle of Lineage 2, with strong focus on PvP

The weapon of slaughter, the Demonic Sword Zariche, was once used by the Demon Bremmnon, one of the four demon kings.

Blood Sword Akamanah is a cursed dual sword weapon that is similar to the Zariche.

Legends say that anyone who touch’s the cursed swords will have their personality changed to an evil one, and the bloodlust will be unstoppable, capable of killing an entire city to feed the swords hunger for blood.

The curse can be broken in two ways: Death, and satisfying/not satisfying the sword hunger.

All monsters in the world have the potential to drop either one. However, only one of each exists in the whole world at once. When a cursed sword drops, the entire world becomes red for a short period of time, the ground shakes, and a system message notifies all players that one of the swords has been found.

The sword possessor goes into a Chaotic State (red) instantly, and his/her HP, CP, and MP are fully recovered (100%).

After the Kamael expansion, the character that acquires either sword is instantly transformed into a dark warrior. The transformation is the same for both male and female, although the transformation is different for each sword. Upon transforming, the player’s name is replaced with the name of the sword, both above their avatar and also in chat. 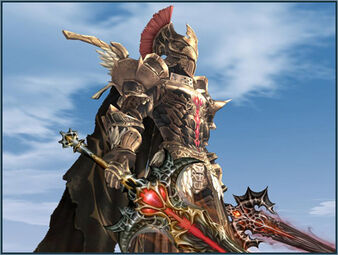 When a character acquires one of the cursed swords, it is equipped automatically and is impossible to un-equip. It is impossible to drop, exchange, or destroy this item from your inventory.

When you acquire a cursed sword (Zariche or Akamanah), certain active skills are granted.

The swords automatically disappear after a certain period of time (once acquired), regardless if the character is logged in or not. When a cursed sword holder kills another player, the sword's lifespan shortens but the sword's abilities increase. However, the sword must kill every day, or it will be deleted within 24 hours. The character who possesses either sword will be notified by a system message with how much time is remaining on the sword and how long it has been since the sword has killed.

When a character who possesses either sword dies, the sword disappears or is dropped immediately. And once the player loses either sword, they are transformed back into their original self.

One of the functions of the Map is to give the location of the cursed swords. When you open your map (Alt+M), there is a Cursed Weapon dropdown box in the upper left corner of the window. Click on one of the sword names from the dropdown menu, then click the Find button. If the corresponding sword holder is logged into the game, then the sword holder's location will be shown on the map, designated by one of the icons below.

Both swords are in the same location.

PK penalties such as experience point loss, item drops, karma increases, etc. will not be applicable to either side in PvP when a player wielding a cursed sword is involved.

A cursed sword holder cannot attack players that are under level 20. In the same respect, players must be level 20 or higher to attack the character wielding the Zariche or Akamanah.

Either sword causes its wielder to recognize everyone involved in a siege war as enemies.

When a cursed sword holder strikes a player (excluding magic and physical skills), including a Hero, the CP of that player is instantly reduced to 0. When a Hero strikes (excluding magic and physical skills) a character wielding one of the cursed swords, the CP of that character is instantly reduced to 0. When a player that carries Zariche and a player that carries Akamanah attack one another, the recipient’s CP is reduced to 0. The same rules also apply in the opposite instance.

A player wielding either sword cannot join a party with other players. If a player acquires either sword while in a party, that character is automatically withdrawn from that party.

The player wielding Zariche or Akamanah also cannot use the party matching system or command channel.

If a player that controls Akamanah acquires Zariche, the newly-acquired Zariche automatically disappears, and the equipped Akamanah's level increases by 1. The same rules also apply in the opposite instance.

The player wielding either sword cannot give or accept buffs and may not be healed or heal other players. However, he or she may use buffs and heal themselves.

The player wielding either sword may summon a pet/servitor, but may not ride a pet.

The player wielding either sword cannot participate in the Olympiad.

When a Hero acquires Zariche or Akamanah, skills designed for Heroes may not be used. The player can use these skills again once the sword has disappeared.