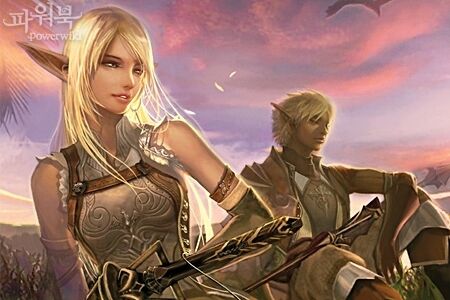 The race of Elves worships the goddess of water and loves nature and aquatic life. The Elves have slim and nimble bodies, long ears, and beautiful features. During the era of Giants, among all creatures they held the most power. However, when the Giants were destroyed, the power and influence of the Elves were also diminished. Now they only inhabit part of the forest in Aden.

Characteristics: Elves are wise and quick-witted. They are fast in attack, movement and casting speeds. They also have superior marksmanship skills and higher evasion ratings. However, their attack strength is inferior to that of other races. 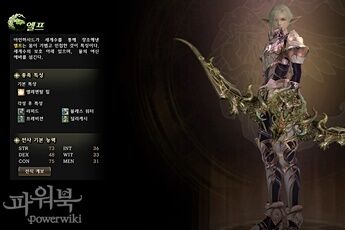 Elven Fighters are those who train themselves physically to protect the forest and their fellow Elves from various enemies - including monsters, Humans and Dark Elves.

Fighters are most often young Elves with strong bodies and minds who occasionally leave the forest and journey to remote locations for training. Their basic equipment is a sword ans leather armor.

Play style: Delicate, willowy, and graceful, Elven Fighters are adept warriors that practice precise, deadly swordsmanship. The mere sight of them wielding their long, slender swords has led some scholars to call their swordfighting the "beautiful dance." 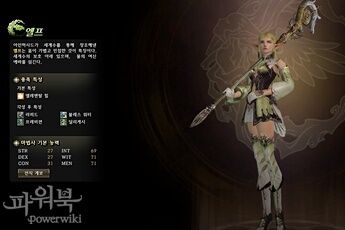 Similar to Human Mystics in their use of attack and recovery magic, Elven Mystics are often seen wearing robes and carrying staves. In order to protect nature, they borrow the power of the spirits and focus training on magical abilities.

Play style: Magic runs deep in Elven blood, and as such the Elven Mystics are perhaps the mightiest sorcerers in Aden. They focus on the strength of their mind, often to the detriment of their constitution, and there may be weak in physical combat. Yet their command of the elemental forces makes them formidable opponents.