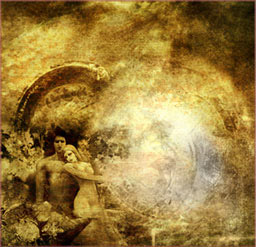 When Gran Kain saw the beings Einhasad had created together with her children, he became curious and jealous. He imitated his wife and brought forth a form in his own image. Then he went to see Shilen, their oldest daughter, and asked her to instill spirit into the form. Shilen was very surprised and told him: "Father, why do you want to do such a thing? It is Einhasad, my mother, who is responsible for creation. Please do not try to do something that is not in your nature. A creature that receives life from a god of destruction will only bring about disaster."

But Gran Kain would not give up. After much cajoling and persuading, finally he was able to obtain Shilen's consent: "I will do it then. But I have already given the spirit of Water to my mother. So the only thing I can give you is the leftovers." Shilen gave the spirit of stagnant and rotten water to Gran Kain. Gran Kain gladly accepted it.

However, Gran Kain felt that it was not enough to give only one spirit to his creature. So he went to see Pa'agrio, his oldest son. Like Shilen, Paagrio also warned his father. However, he could not refuse Gran Kain. So he gave the spirit of dying fire to Gran Kain. Gran Kain gladly accepted it.

Maphr also pleaded with her father, having tears in her eyes, but ended up giving the spirit of barren and contaminated earth to her father. Sayha, in his turn, gave his father the spirit of wild and violent wind.