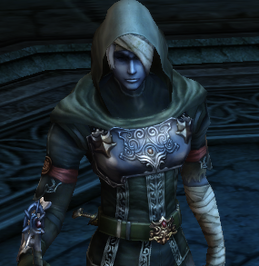 Nemertess was an Dark Elf sorcerer who tried to revive the sealed creature Sakum, in the Labyrinth of Belis under the Ye Sagira Ruins. He was a member of the organization called Embryo.

Nemertess was a researcher scientist, alongside with many others, in the Ye Sagira Ruins.

Nemertess killed Saril, Pantheon's son. Some time later, Nemertess is seen going inside the Labyrinth of Belis to try and hatch an Evil Fragment.

The player successfully prevents Nemertess thieves from stealing a book called "The War of Gods and Giants" when Pantheon asks to the player to search for the book inside the Museum. Pantheon suggests to the player to try to find more information about the thieves' identities.

After some investigation at Ye Sagira Ruins, the player finds out that the base of operations of the thieves is the Labyrinth of Belis. With the help of a guard named Terain, the player makes his way into the labyrinth and finally finds Nemertess. Nemertess has managed to hatch the Evil Fragment but states that the ressurection was incomplete. He commands the creature, Sakum, to leave for the main continent first.

Nemertess decides to kill the player, and transforms into a Shadow kind creature.

The Player can easily kill him alone, wherever.

In his death, Nemertess confess that he accept his demise if this helps the Goddess Shilen, and give the word that his job is already done, vanishing in the front of the player. 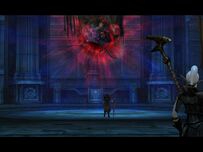 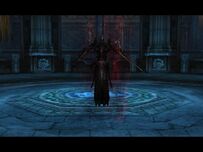 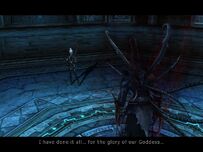