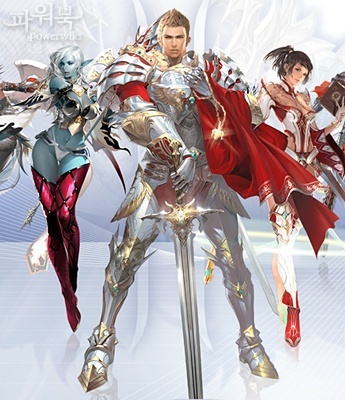 Six different races coexist in the world of Lineage II, each with its own physical characteristics, classes and powers.

Humans in Lineage II are similar to Humans in the modern world. Humans currently have the greatest dominion in the world and the largest population.

Special Abilities of the Race: Although Humans do not possess any special abilities, their strong point is the fact that they can transfer to the most specialized classes.

The race of Elves worships the goddess of water and loves nature and aquatic life. The Elves have slim and nimble bodies, long ears, and beautiful features. During the era of Giants, among all creatures they held the most power. However, when the Giants were destroyed, the power and influence of the Elves were also diminished. Now they only inhabit part of the forest in Aden.

Characteristics: Elves are wise and quick-witted. They are fast in attack, movement and casting speeds. They also have superior marksmanship skills and higher evasion ratings. However, their attack strength is inferior to that of other races.

Dwarves are of the race of earth they were made from and worship the God of Earth Maphr. They have strong physical strength, a curious nature, and a fondness for creating new items. After the destruction of the giants, the Dwarven race always tried to side with the most powerful race in the land. However, as a result they became an isolated race - disliked by all other races for their profiteering nature. Their society structure can be compared to a large corporation and they are still renowned for their business savvy and capacity for organization. Dwarves are largely divided into Scavengers who find and retrieve raw materials, and Artisans who manufacture products out of raw materials.

Special Abilities of the Race: Their inventory size is larger than that of other races and, compared to other races, their weight penalty is lower.

Kamael were born in the Era of Myths. These mysterious creatures have preserved their own unique culture living within the confines of the Isle of Souls, a haven located to the west of the Dark Elf Village. They appeared on the continent under the guidance of the Gods. Unlike the other five races that were created by gods, it is speculated that they were created for the purpose of battling against some unknown creatures. They are born into their destined religion that serves an absolute ruler called the “Mother Nornil”. Under the Mother Nornil, they devote their faith in the Goddess of Past, who rules history, the Goddess of Present, who records everything happening at this moment, and the Goddess of Future, who forecasts what’s to come.

Special Abilities of the Race: Kamael have an affinity towards darkness.  Because of this they can increase their own or decrease an enemy’s resistance to darkness, or bestow a darkness buff to their attacks. The Kamael can consume the souls of their enemies and turn the souls into energy to fuel their own skills. Most of their skills such as laying traps, buffs and magic can only be activated upon consuming a certain number of souls. The Kamael can only wear Light Armor, and when using recovery magic, a 60% penalty is applied.
Characteristics: The Kamael specialize in different classes according to their gender.  They are classified as fighters by default; however, spell abilities are usable by absorbing souls.

Retrieved from "https://lineage2.fandom.com/wiki/Races?oldid=5132"
Community content is available under CC-BY-SA unless otherwise noted.